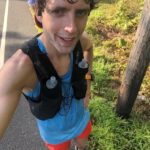 Sam Herreid is a glaciologist, runner, co-founder of the nonprofit Open Climate Research Collective, barista, and musician working on a genre of music that captures the culture of ultra trail running. Like surf music, but instead of “catch a wave”, it’s “catch a ridge and you’ll be running on top of the world.” Sam grew up in Fairbanks, Alaska and now lives in Bradley Beach, New Jersey.

If you’re not obsessive over your training numbers, you’re either a recovered obsessor or you haven’t spent three paychecks on a sports watch yet.

Personally, I solved the classic 9.95-mile, run past my house to get a round number, fixation by splitting unit custody between my watch (imperial) and Strava (metric). Clean numbers on one device are a jumble on the other. This spun out my brain and it decided it no longer gave a shit. My legs, seeing exactly zero productive adaptation from +0.05 miles, co-signed dropping the absurdity.

You may have read about my urban ultras, a last ditch effort to maintain some semblance of adventure amid an otherwise unremarkable human experience by running routes better traversed by Greyhound buses. An edge case of this effort, a subset annual tradition of mine, draws on a fun, arbitrary choice made by some executive at Strava and implemented by some programmer with a line of code: the timestamp of an activity is pinned to its beginning, the moment you start your watch. (An activity’s end or middle point would also be perfectly acceptable conventions to define a single instance timestamp).

In other words, it’s the running equivalent of the heart stopping shot from half court in a basketball game just before the game ending buzzer sounds and an entire stadium rises to their feet, mute with rapt attention as all eyes follow the ball through the air, catching only net and winning the game by a 1 point margin. It’s exactly like that. Except a Madison Square Garden’s worth of people would rather lick a subway pole and get Covid than watch you jog. Some moments of magic can only be private.

I like to do my Hang Time into the New Year Run somewhere densely populated.

We’ve all schlepped out a halfhearted night run, annoyed with ourselves for procrastinating away the daylight hours. It’s dark. Maybe cold. The few people we see, if any, are either absorbed in social activity, possibly heckling or harassing us, or are a perfect mirror to our I-should-have-been-in-bed-three-hours-ago misery and pass by without acknowledgement.

One night per year, this nighttime narrative is entirely scrubbed. The streets are flooded with activity and virtually no one is not making a situation of themselves. Running into the New Year through a metropolis is sort of like running through the streets of Chamonix to a podium finish at UTMB. Everyone is there and a palpable, raucous energy is maintained at maximum intensity irrespective of the time of day or night. The only key difference is no one has even the slightest understanding of who you are or what you’re doing.

My most fond Hang Time into the New Year Run was running the full perimeter of Manhattan (50 km) starting at 10:30 p.m. in 2019. I started close to Yankee Stadium and ran the northern, Inwood section first. Surprisingly quiet and with a hill, Inwood is usually my favorite section to run, but not on New Years Eve. I wanted the quiet boring bits out of the way. The clock struck midnight while I was cranking down the West Side Highway. I couldn’t quite see the Time Square fireworks but there was a lot of hustle by people late to their parties who were, impressively, showing more leg than I was in running shorts on a chilly winter’s night. There was energy in the air and a lot of annoying hats. Rounding lower Manhattan around 2 a.m., I started to witness a transition to tears. Some mix of jubilant expectations, alcohol and underperforming romantic partners probably catalyzed the ductal emissions experienced synchronously throughout the city, all at a time of night almost everyone would otherwise be deeply asleep. From my ultra vested body and 8 min/mile pace, I watched on with foreign fascination. Occasionally a set of intoxicated eyes, damp or dry, would take me in, with equal and opposite foreign fascination. The drunken heckles were excellent and for one night of the year Americans shed their inhibitions and happily engage with any passing stranger, “Happy New Year!”

While it would take an Appalachian Trail scale run to hang time 2022 into my highest volume year on record (it was so much easier to run doubles when I was an unemployed dirtbag), I’ve still got an exciting expanse of 4 lane highway queued up for my year-end closer. The plan is to start running in Wilmington, Delaware, in 2022, and finish in downtown Philadelphia, Pennsylvania (50k), in 2023, or should I say more correctly, in the Strava hang time of 2022.