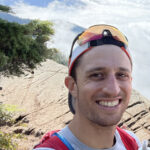 Liam Tryon is a runner and avid consumer of trail running media, who can often be found daydreaming about the mountains, while located in Toronto, Canada.

We are a lucky bunch! In 2023 we are not only treated to a brand new livestream of race day, but also a recap by our own @aidstationfireball with images from Mike McMonagle.

With the turning of the calendar, the pursuit of a berth into the Western States 100 Mile Endurance Run (WSER) in Auburn continues with the HOKA Bandera Endurance Trail Race 100-kilometer. Situated at Hill Country State Natural Area in Bandera, Texas, Bandera has formerly served as the venue for the USA Track & Field 100-kilometer Trail National Championships, but has in recent years become a target for elite trail athletes looking to secure an early season ticket to the big dance, with the top two women and men given automatic entries into WSER.

Historically, following Bandera has been a challenging effort, due to the lack of reliable cell service in the region. In previous years, audiences looking to track the race were only privy to lap splits, recorded at the halfway point and finish line on the two loop course. Thanks to the team at Aravaipa Running and their sponsors, the trail running community was treated to full race day coverage, including live race commentary and analysis from their studio in Phoenix, in addition to on-the-ground reporting and live-action shots of the race as it unfolded.

The race kicked off with temperatures in the mid-60s and high humidity, which gave way to some light rain for the first few hours of the race. Both fields were seemingly conservative in their approach through the first loop of the course, perhaps in part due to the stickiness of the mud on trail. Slowly, a lead pack began to emerge in the men’s field, led out by North Carolina’s Canyon Woodward (Unsponsored) and Colorado’s JP Giblin (Unsponsored), chased by Anthony Lee (Topo Athletic), Bryan Kerl (recent winner of a Salomon sponsorship) and Jeff Colt (On Running). In the women’s race, 2022 Ultrarunner of the Year favorite, Courtney Dauwalter (Salomon) broke away early in the women’s field, pursued by Vermont’s Kasie Enman (Unsponsored) and Quebec native Sarah Bergeron-Larouche (Norda), then followed closely by Katherine Short (Hoka) and Amanda Basham (Altra). Course conditions in the first half of the race were reflected in some of the slowest individual opening lap times in recent years from the men’s field. However, this measured and steady approach lead to the tightest bunching of male runners from first through tenth place in race history, with Woodward and Giblin separated by only a couple seconds at the conclusion of the first loop. Less affected by race conditions on the opening lap, Courtney Dauwalter split a blistering 4:14:17 through the halfway mark, putting her ahead of Stephanie Howe’s 2017 course record pace by almost 4 minutes. The lead women’s field matched her record pace, with historically fast opening lap times through the first 50k, and an exceptionally tight lead group of female runners.

Through the halfway mark, the humidity began to lift, and on-course reports indicated that the trail was showing signs of drying up. After a few position shakeups, Jeff Colt pushed to the front of the race, asserting a small two-minute gap by the mile 52 mark, with JP Giblin and Canyon Woodward still hot on his heels. Jeff continued to hold steady, and crossed the finish line in 8:23:51, logging one of the slower but grittier winning times in the last decade at this race. JP Giblin came across the finish line just over five minutes later in 8:29:06, with Canyon Woodward finishing an additional six minutes back in 8:35:23. The top five men’s field was rounded out by Chris Myers (Salomon), in his debut 100-kilometer race, in 8:37:05, and former obstacle course racing (OCR) World Champion Ryan Atkins (Unsponsored) in 8:55:47. Other pre-race favourites included Barkley Marathons-finisher John Kelly (La Sportiva) in 6th, Bryan Kerl (Salomon) in 7th and Caleb Bowen (Unsponsored) in 11th. Ryan Montgomery (Altra), Joe “Stringbean” McConaughy (Brooks), Anthony Lee (Topo Athletic) and Charlie Ware (Topo Athletic) unfortunately did not complete the race on Saturday.

In the women’s field, Courtney continued to demonstrate her superhuman strength, driving herself across the finish line in a new women’s course record of 8:59:34, finishing sixth overall and becoming the first woman to crack nine hours at this race. In a field of this strength, the magnitude of her dominance is highlighted by the fastest closing lap and one of the largest winning gaps in Bandera race history. Texas local Nicole Bitter (Altra) came through the second loop in fifth, but charged through the field to grab second place in 10:03:59. In immediate pursuit of Nicole through the halfway mark, Florida resident Careth Arnold (Unsponsored) also pressed through to finish in third place in 10:13:45. The women’s top 5 field was filled out by Amanda Basham, racing her first ultra since becoming a mother for the second time, in 10:20:25, followed closely by British Columbian Katherine Short in 10:21:07. Other noteworthy pre-race contenders included San Antonio local and Freetrail community member Courtney Rouse (Unsponsored) finishing in 6th, Kasie Enman, who was in closest contact with Courtney Dauwalter through the halfway mark, in 8th, Olympian Alexi Pappas (Altra), who raced her first ultramarathon, in 12th, and OCR athlete Alexandra Walker (VJ Shoes) in 21st. Sarah Bergeron-Larouche, Rachel Lemcke (Rabbit Elite) and Michelle Magagna (Unsponsored) did not finish the race.

Pending official confirmation from Western States, Courtney Dauwalter, Nicole Bitter and JP Giblin have all indicated that they plan to accept their automatic entries into the June race. On the other hand, Jeff Colt has suggested that he will take some time to decide if he will accept his second consecutive Golden Ticket to seek retribution for his 11th place finish at WSER in 2022, or instead focus his efforts on representing the United States at the World Mountain and Trail Running Championships in Austria this June. A particularly interesting storyline which we’re keen to follow is Courtney’s stated goal of racing at both WSER and the Hardrock 100 Mile Endurance Run this year. The combination of the quick turn around time of these races, paired with difficult entry processes and contrasting course styles makes this a rare and exciting opportunity to be one of the few athletes to complete this “double” successfully.

In Sunday’s 50k race, Houston’s Joshua Fowler (Unsponsored) and Melbourne, Australia’s Lucy Bartholomew (Salomon) both took the wins in 4:01:59 and 4:32:39 respectively, with Bartholomew finishing in third on the overall podium.