We get to do this 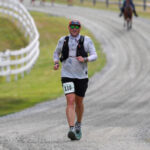 “We get to do this!” is what my wife said during our first 100-mile race in 2019 when I was struggling. Her words are something I try to keep in the forefront of my mind when I am training or running an ultramarathon.

I never felt comfortable in my own skin and used alcohol as a tool to calm my depression and anxiety. Looking back, I now realize I never drank like a normal college student or adult. I drank to not feel anything.

By 34 years old, I had a wife, young daughter, and was literally killing myself with booze. I had no idea how to stop or if I even wanted to. My drinking brought me to a place where I hoped I would die before 40, as I thought my wife and child would have a better life without me. Not only was I an alcoholic, but I was spiritually sick, and my soul was sick.

At 34, I was about to lose everything.

On March 24, 2013, I looked at my wife and saw the person I loved completely destroyed. I can still remember this moment today and where I was when I said I would stop drinking. I was scared to death, but at that moment I realized I wanted to live. I could no longer do this to my family. I learned how to be sober a day at a time while attending a twelve-step program regularly (I still attend a twelve-step program to this day). I was trying to be a better father and husband, while learning life could be lived without a drink.

After about a year sober, my wife suggested I should start running for exercise, along with my twelve-step program.

I hate to admit it, but at 35 years old, I couldn’t make it a half-mile around our neighborhood. However, even in that half-mile, I started to feel I was doing something for me and it was something I started to like. I went from a half-mile to a mile without stopping and thought I was on top of the world. Running became a new form of meditation for me early on in my journey to sobriety. I was able to find more peace within myself.

I did what most people do and signed up for a 5K.

I was so nervous. I felt like it was the first day of school, and I didn’t know what to do. Everything was new to me, from pinning on the bib to drinking water while running.

I finished that 5K with my wife and daughter cheering me on. It was a feeling I had not had since maybe playing Little League as a child. Instantly, the seed was planted and running became my new passion. Like most people in recovery, I am not good with moderation and accelerated from 5K to marathon quickly.

Getting sober allows me to be the person I am supposed to be.

I’m not supposed to be a daily drinker, who reaches the point of not wanting to live. I had to change everything in my life or I was going to die. Running became not just a hobby, but a new identity.

I ran my first marathon in 2015 at the Vermont City Marathon. I finished in just over five hours and that was OK. I crossed the finish line with my family there cheering me on.

For me, I had done the unthinkable. A part of me also wanted to show my kids that we are capable of so much more than we believe. Just because your circumstances look bleak today, doesn’t mean the rest of your life will continue in the same way.

That night, after finishing the marathon, I could only think about one thing: running an ultramarathon.

When I was drinking, moderation was not something I could grasp. My goal was not to feel my feelings, and only mass consumption of alcohol gave me that reprieve. Running became my new activity, and I have struggled at times not becoming fully obsessed.

I have to realize running is something we get to do, not something that should control my life the way alcohol did.

I am still a father, husband, friend, employee, and running should not come before any of those things. I have learned to listen to others when they see my priorities slipping. This challenge with moderation is common with people in recovery who enter the endurance world. Many of us recovering alcoholics and addicts are ultrarunners. We like to do things to extremes and have to remind ourselves to keep that in check.

I love the way long runs make me feel. Running feels like a legal high and is the only drug I allow myself. The feeling of accomplishment makes me feel better than any drink I ever had. The challenge of distance running is empowering and has been life changing— giving me self-confidence I have never experienced before. Now, deep into a race, I find out who I really am and that is awesome.

I ran my first ultramarathon at the 2015 Farm to Farm 50K in Maine. During that race, I went to the darkest place I had been since getting sober. I was in pain and full of self-doubt. I wanted to quit so bad after about 20 miles, but I worried about being seen as a failure. I shuffled along for a few miles thinking only about how I was not good enough to finish.

“I am too fat. I am too slow. I am incapable of finishing this thing I started.”

Finally, I realized if I could get sober, I could do this. I got a little pep in my step and finished on fumes, but finished nonetheless.

Many other ultramarathons came and went, but running 100 miles was always a goal.

My wife, after the birth of our second child, began running again. She is my biggest supporter, and she also entered the world of ultras. In 2019, we signed up to run the Badger 100.

Was I really a runner?

Was I a fraud?

These are all things that crossed my mind as we began. However, we forged on into the abyss of corn and soybean fields.

When night came, we were 70 miles in and stumbling in the dark, but still moving. I had thrown up and was wishing for death.

Those words helped remind me of my strength, and what an incredible opportunity it was to be able to experience something like this. We finished the race as we started it, by each other’s sides.

At home, we seldom run together. We train at different times because of our children. Usually, during races, we separate after a few miles. However, in this instance, I needed her encouragement. Being able to finish such an epic adventure with the woman who stood by my side during my active alcoholism was a blessing. Getting that belt buckle almost felt like getting my first-year sober chip. It was acknowledgment of how much I had changed and how different my life was being sober.

I realized the first 100 finish was not a fluke. I realized our potentials are so much greater than we allow ourselves to realize. Sometimes, thoughts of failure cause us to fear taking the risk of challenging ourselves. Through suffering, though, we learn that we are truly stronger than we ever know.

In 2020, I was lucky when a race popped-up in November since the majority of the year had been derailed. During that time, I really missed the community of runners. I am a shy person and can isolate myself easily. However, on the trails, it seems the environment lends itself towards being in a place to share and fellowship. My wife and I again finished another 100 miles together at the Hamster Wheel 30hr.

I hoped 2021 was to be a more “normal” year after the beginning of the pandemic. I set my sights on a goal race and was fortunate for a new community that popped up as well. At the time it was called Pyllars and now Freetrail. I have been able to make some friends and find great support in this community. Through sharing our stories of life on the trail, we can help each other prepare for our next adventure. I wanted 2021 to be the year I got a 100-mile PR.

Something else also happened in 2021.

I started to add more meditation to my recovery practice. I had to remind myself that taking care of my mental health in recovery is a key, just like following a training plan for a 100.

My wife and I ran the Badger 100 again and improved our previous time by a few hours. The ultimate goal for 2021 was a 100-mile PR at Ghost Train 30 Hr. On the eve of Ghost Train our youngest daughter had come down with a bad cold and we could not leave her. She wanted her mom.

This instantly put fear into me because I was going to have to attempt this 100-miler alone, without my wife by my side.

I was scared to death.

Who was going to get me through the dark part of a 100-miler? I am surely not mentally tough enough for this. I started to freak out, to be honest. On race day, I woke up at 2 a.m. full of anxiety. I did something I normally never do — I meditated for 20 minutes before getting ready. The practice I had been working on all year became super useful that morning.

Ghost Train started without a hitch for the first 45 miles. I saw a lot of friends and was running right on pace for that PR I trained for all year.

Around 10 p.m. it started to pour like I assume had happened after Noah built his Ark. Instantly, my pace slowed as running in a deluge in the dark became troublesome. I was entering that dark space that I didn’t think I could get out of. The field was dropping out and I was in the scariest place I could imagine — in my own head.

Running an ultramarathon alone takes hours of mental gymnastics to keep going. I did remind myself of what my wife said to me many times during other races – “if I can get sober, I can do anything.”

This reminder kept me moving. I was not that same person that was killing myself with alcohol. I had two wonderful girls, I was a husband, friend, and had a passion for something that challenged me.

That night was tough, but I kept moving. When the sun came up, I rejoiced in the ability to see the beauty of the forest. Sobriety has given me the ability to just appreciate a simple trail and a multitude of foliage-filled treas. With about 2 miles left I realized I was going to get my sub 27-hour PR. Instantly I was crying like I hadn’t in years. These were tears of gratitude and that I did this all alone.

Getting sober prepared me and showed me that I am stronger than I think I am. I am grateful this is what my life has become.

My life is full — not because of money or things — but because I can take enjoyment in incredible challenges and the amazing people around me.

I also co-directed my first trail race in 2021 with my sober friend Rob. Seeing runners cross the finish line and enjoying the trails was another gift.

I have to remind myself and others that we can do hard things. Just because adversity confronts us, we don’t have to give up. Go out there and seek adventure. We get to do this!