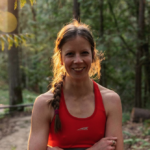 We’re kicking off a fueling series with Keely Henninger with a piece she wrote on the importance of proper fueling. Keely recently won the Gorge Waterfalls 50K, and partially attributes this win to her well dialed fueling strategy. Read on for her thoughts on fueling during training racing.

“How was your fueling?”

Say that to an ultra/trail runner after a long run and you’re sure to get an awkward, grumbled response resembling something like “Oh, it was fine.”

No more details or comments added. We shrug off our poor fueling habits and carry on with our day thinking, “Next time, I’ll really nail my fueling.”

But that’s like assuming that one day you go from running 9-minute miles to 6-minute miles without a change in training. It’s not very likely to happen.  We won’t just magically go from consuming 1 gel per hour during runs to constantly consuming 3–4 gels (or their equivalent) overnight.

With race season just around the corner, now is the time to start practicing your nutrition plan during your training runs.  Not only will you end training runs feeling strong but you will begin your next run recovered. The guidelines are variable when it comes to fueling, but one thing that holds true is how necessary it is.

A lot of us tie up fueling into a lot of other things like our ego or perception of strength.  It doesn’t belong there. If we refuse to fuel properly during a run because we want to feel strong; to feel independent; we are only doing ourselves a disservice and we will not run to our potential.  Fueling will allow us to reach our potential, run workouts strong, finish long races without bonking hard, and recover for future runs and adventures.

How much should we really be fueling?

While the research is not definitive regarding an absolute number of calories or carbohydrates that will work for each individual, most studies have shown that the majority of ultra and trail runners do not meet the minimum recommendations for carbohydrate consumption during ultra endurance races (1).

Ingesting carbohydrates during moderate exercise lasting 2 hours or more has been shown to decrease fatigue and improve performance. Ingesting anywhere between 30g-110g of carbohydrates per hour has been shown to improve performance, with most studies showing that between 40-75g/hour is advantageous (2). For reference, that is between 2-4 gels (or their equivalent)  per hour.

In order to consume upwards of 100g of carbohydrates per hour, typically athletes need to train their stomach incrementally to adapt to the high number of carbohydrates (2). However, the values are extremely dependent on the individual, so you may have to play around with the number for a little to find the level that suits your needs and keeps you feeling fresh.

It’s easy to go out on a long run and forget to practice your race day nutrition plan. Most of our training runs are not as long or as difficult as race day and we can typically get through them with less fuel than is needed.

However, treating your runs like dress rehearsals for the race will make your race day fueling feel natural and easy.  A couple of times before race-day, head out for your long run with the same fuel and hydration system you plan to race with and make it your goal to consume consistent calories for the entire run to hit your goal of # of carbohydrates per hour. (For example, if I want to target 60 grams of carbohydrates per hour and I am running for 3 hours, I will shoot to consume around 3 gels per hour or 9 total).

Depending on the weather, you may want to alter your calorie type for increased palatability, so you may want to try a couple of options during your dress rehearsal to be ready for whatever race day throws your way.  For example, during really hot races, liquid calories are easier to consume for some, but during cooler temperatures some prefer gels.  There is no “one-fueling” fits all, so find what works for you and practice.

Racing season is coming, so set yourself ahead of the rest by focusing on your fueling now.

The next time you find yourself saying, “I don’t need to fuel,”  pause, ask yourself a second time, and answer again.

‘Fueling is my friend. It’s my superpower. Of course I should fuel.”

Next week, we will talk about the importance of hydration during training and racing. Stay tuned!

Sweaty Season: The Basics of Hydration