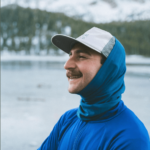 Rod is a trail pro "trying to figure out how this whole thing works" from Mammoth Lakes, California.

We are back with another edition of the Athlete Journal, bringing back the athlete blogs of yore. In short snippets Rod has written about fear causing him to ‘deprioritize’ this running hobby of his – the same fear many of us face when we care a lot about the things we do, the big swings we take (and the victories or failures that come along with them). I asked him to expand on that here for you, and how finding belonging in his community has been grounding in that process.

The hardest part of life is often choosing how to spend it. Our path is influenced by an overwhelming amount of inharmonious voices and nudges – making it nearly impossible to know what we should really be doing with our time. One of the most prolific drivers in choosing a direction for many of us is acceptance. It is a fundamental and evolutionary need for us to receive the stamp of approval from our peers. It is not only how we thrive, but how we survive.

On the extreme end of acceptance is remembrance. Through remembrance, you are not just a puzzle piece that fits in the community, you are one that triggers positive change in society’s framework – impacting the lives of those around you. Not all, but many people want this extreme form of acceptance – wanting to do something so meaningful it creates a lasting impact in your community. It is not trivial how one does this. It is not trivial to have people listen to you. It is terrifying to go against the social norm and pursue this extreme thing when you have just barely achieved acceptance to begin with.

I believe the largest impact any individual can have in this world comes as a result of pursuing the act or outlet that inspires them the most. Only through such intense inspiration and genuine passion can one summon the motivation to overcome inertia – having a striking effect on people’s lives. Whether it is obvious or not – whether your passion is developing new protein expression systems to aid in the treatment of cancer, or doing complex bioanalysis of pharmaceuticals to synthesis new drugs to combat depression, or creating masterful art that will be hung in the most prestigious museums in the world, or collecting and carbon-dating samples of rock to uncover new truths from our past, or even pushing yourself to run extreme distances self-supported in remote mountains – pursuing your passion will make an impression on someone as they watch you give it your all.

For the longest time, I thought of running as this selfish thing that I did. How is it not? I train by myself, I race for myself, I ask others to come give up their entire weekend to douse me with water, feed me potatoes, and walk miles in the dark with me while I stop every 10 minutes and profusely eject everything they just fed me from both ends of my body… I often found myself embarrassed after races, after having asked so much from my friends and family all just to receive a finisher medal or maybe, if it all went well, a handmade belt buckle. I felt as if this thing I was pursuing was outside of the realm of acceptance in my community. I felt the more I invested in it, the less people understood me.

It has always been hard to rationalize putting so much time and effort into something that didn’t have a tangible material reward. At least in most other popular sports, competing well has a direct correlation to financial gain. The easiest way to justify the high input, low output nature of trail running was to just simply not. As a lazy defense mechanism against having to explain myself, I would often brush this thing I am so deeply in love with off as an ‘aimless hobby’ that just did not matter.

There was a certain freedom that came with this new framing of running and racing. All of a sudden how I performed did not matter because by way of appearance, I did not care. It was all just a self-proclaimed hobby. Hobbies by definition are “activities done regularly in one’s leisure time for pleasure”. There is no accountability associated with a hobby. There is no investment. I told myself I did not care out of fear that a full investment into racing would still culminate in a mediocre result. Instead, I hid behind indifference and all of a sudden felt accepted again.

After a couple of years of trying to convince myself that competing on the trails was not an important part of my life I found myself in a place where I was surrounded by others who were completely devoted to their craft – Mammoth Lakes, California. The dichotomy in lifestyles between this microscopic ski town in the Eastern Sierra and my former residences in cities was astonishing – a true cultural shock. I quickly realized that recreating in the outdoors was not just a hobby for members of the community up here – it is everything. And that, for me, was infectious. I suddenly felt comfortable allowing myself to dive head first into running again, dream big goals, train hard and make pivotal lifestyle choices to chase them. The more I allowed myself the opportunity to fully invest in racing and competition, the more confident I became in my own skin. This is me. And all it took were individuals pursuing their passions for me to want to pursue mine.

Since then, I have raced more than ever. Just in the last year I raced two 50-kilometer events, two Western States Golden Ticket 100-kilometer races, Western States Endurance Run, UTMB Mont Blanc, and this week I will be toeing the line at Doi Inthanon Thailand by UTMB. While I was able to execute and produce ok enough results at most of these races, I underperformed at others and I am fully aware that will happen again. I will fail more times than I succeed, that is almost a guarantee, and I’m learning that is okay. Failure was what I had feared the most when deciding whether I should fully invest all my mental and physical energy into this sport.

What I discovered the most from the heavy race schedule this year is that the impact I will leave on my community from pursuing big goals in this sport is not found on any results list. Whether I win the race in a stroke of flawless execution or end up tearing myself to pieces in a colossal implosion that leaves me hiking the final hours of the race for a middle of the pack finish – the reaction from my community is the same. The inspiration persisted because it was clear how much I wanted this thing and how much of my soul I devoted to bring it to fruition, whether I am successful or not.

My time and the place I ultimately end up in any race is not what matters. What matters is everything that comes with the all-in pursuit to achieve the goal I set out to accomplish and the silent ripple-effect that makes its way through my community of friends who are watching. What matters is the self-discipline to wake well before the sun in the middle of the winter and train in freezing temperatures when no one is watching. What matters is learning how to cope with failure and disappointment and then bouncing back by applying lessons from your previous experiences. What matters are the people who reach out to let you know you inspired them to start running. What matters is the race as a vehicle to reunite with close friends and family members when visits are less trivial to coordinate now. What matters is the empathy you develop by traveling to races around the world and experiencing new cultures and ways of life. What matters are members of the sport, whether they be fans, runners, volunteers, all gathering together and displaying unparalleled levels of humanity by supporting each other across the finish line. All of this is what matters and it is completely independent of whether I win or am unable to finish the race.

Even if unintentional, self-expression is a powerful tool that can influence others to make a change themselves. When people are exposed to your relentless work ethic and burning desire to succeed in your craft, at least some will walk away with an itch to pursue their own personal interest too. Self-expression is infectious. The more people that can absorb that feeling, becoming hungry to be their best, the more people there will be in this world giving chase to excellence in the craft they were born to do. In my subjective lens, this can ultimately lead to a more prosperous and efficient world where all committed individuals could be making lasting impact by giving 100% of their mind, body, and soul to their true passion. Everyone has an opportunity here, so what are you hungry for?