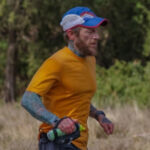 Ari originally hails from Brooklyn, NY but now settled in The Netherlands. He is our Freetrail Sage, opting for the solitude of running on the trails over the busy city life.

Trigger warning: This article contains reference to self-harm and suicide.

My first suicide attempt was in 2009. At the time, I was living as a monk in an Ashram in an ancient village called Radha Kunda, India. After fifteen years of serving in the United States Army, multiple combat tours ranging from the mountains of Bosnia to the streets of Mosul, Iraq, my mental health had suffered enough that the day after I left, I got a one-way ticket to India, never to return. As I dived deeper into a monastic life, the depression, the nightmares, the flash backs shredded my mental state more and more until one day I decided I could not live any longer.

My plan was simple: go to the sacred lake, and drown myself using sacred stones tied around my waist. As I started acting out this plan, I was spotted by a fellow, more senior monk. He stopped me and brought me back to the ashram. I was an emotional wreck, and as I sat in front of the ashramś leader, all I could think of is this will never change. The ashram leader was a south Indian man, a renunciation for thirty years already, very grave, but also loving and caring. I remember him taking my hands and looking at me with compassion. He told me, the way to cleanse our heart is through prayer and tapasya. Tapasya in Sanskrit means austerity. He suggested I perform what is known as a dandavat parikaram around the sacred hill called Govardhan.

Dandavat is a sanskrit word that means flat as a rod, parikaram means path. He instructed me to take a stone in my hand, lay completely flat on the ground with arms stretched, and place the stone down. Then get up, walk to the stone and repeat, and repeat, until I circumambulate the hill which is a total of 42km. There were rules to follow. No eating and drinking while performing the austerity. At night I could beg for only enough food and water that could fit in the palm of my hand, no more. If no one gave me food, then I should fast until the next evening. There was to be no talking, no shirt on, no shoes, no knee pads or blanket to ease the burden on the knees. I could not change the path, so if something was in my way I had to go through or over it, which meant laying in cow dung, being attacked by monkeys, and so on. After seven days, I finally finished, and my first endurance event was completed.

Fast forward some years, and my monk life was finished, but that need to perform some type of austerity for my mental health was missing. I started to use Memorial Day weekend as a date for a yearly endurance challenge. A special day that brought me lots of pain, remembering lost friends, and brothers and sisters in arms. First, it was doing an ultra-endurance cycling event, a 250km bike race, or riding my bike 200 miles in one day to Paris. As I got into trail running and specifically Ultra running, the challenge morphed into self-supported 50k runs, and backyard 100ks, with the focus always being on remembering those who are lost, and by performing austerity cleansing the heart of the pain that was within it.

For me, the Dutch Mountain Trail was a chance to honor those who died an early death. The bond that is formed in the military transcends bodily designations; it’s also a bond that is hard to find outside of that life. You train with each other, sleep next to each other, laugh together, and cry together. It’s a bond formed around suffering. When you have to stand in front of a pair of combat boots with a rifle between them, ID tags swinging in the wind, and say your final goodbye, you never forget them. It feels like a piece of you dies. This year, thanks to the man known by the initials MVD, we raised money for The Wounded Warrior Project.

I wish I could write a report about how amazing the views were, how the forest smelled, or how the breeze sounded as it gently rustled the leaves on the forest canopy. Instead, my mind was brought to the face of Specialist Danny Daniels, and the last time I saw him was when he dropped me off at the Green Zone in July 2004. Reliving that feeling when I learned that he died in an ambush two hours later. Of CPL Ricky Bell, who died in a Blackhawk crash over the sands of Northern Iraq. Of SGT Kevin Bell, and Michael Freitas, who both passed in car accidents after surviving tours of duty in combat. Of my best friend, Luke Gorey, who recently passed from cancer.

You see, for me, ultra-running is about diving deep within myself, and allowing my mind to wander from thought to thought, memory to memory. Often the memories are painful, but being on the trail, running for hours and hours on end forces me to confront those emotions. It forces me to sit with them and go deeper into them. I never listen to music, just my ongoing internal dialogue and wherever it may lead no matter how heartbreaking it can become. It has become an important tool to manage my mental health, my PTSD and the accompanying depression.

So, on a rainy, windy, early morning, I set off on this journey. The first two sections went fast, and smooth with no issues. The rainy weather kept temps cool, and pleasant. The route recon for the first 50k proved valuable as it allowed me to move quickly. But the smooth sailing wouldn’t last long. Due to downed trees, and storms the prior weeks, a large section of the trail was closed, which required me to navigate on the fly. A missed turn caused me an extra forty-five minutes to get to my second aid point, and the all-around FKT slipped through my fingers.

Pulling into that aid point, knowing it was likely I could no longer get the overall FKT, I was a bit dejected. I was super quiet, not talking, and pissed at myself that I did something so stupid. For the next few miles, I had a pity party, sent a voice message to Aaron, and decided to just finish the route regardless. Adjusting fire, the FKT turned into something different. The goal changed, and it went back to that feeling I had in India. The feeling of austerity in the name of purification. A story came to my mind that was told to me by a sadhu in Varshana, India.

Once on an island where all the emotions were living, a volcano erupted, and the island started to sink. Immediately, Love, being the topmost emotion, directed all the other emotions into a boat. Love started calling off names to make sure they made it. ¨Anger, Lust, Envy, Enjoyment, are you on board?” Love yelled. “Yes!” “Ego! Did you get on?” cried Love. No answer from Ego.

The other emotions started to tell Love, “Leave Ego! Let us go now!!!” For Love this was not possible, it is against the very nature of Love to forget about someone. So Love jumped off the boat and ran and found Ego, who was relaxing. “Ego, we gotta go!”, screamed Love. To which Ego replied, “Nah I am good, it’s not so bad.” Eventually the boat left, and the island sank, killing both Ego and Love.

The sadhu explained to me that our love cannot survive our ego, and our ego will always kill our love. Be in family, friends, or passion. An unchecked ego can consume and destroy all we hold dear.

As the miles clicked off, and my ego was smashed, the FKT became enjoyable. Now, not stressed about the time, I allowed myself to be there with my thoughts and emotions. Hitting the 52-mile mark and final aid station, I was in good spirits. Ready to tackle that last 14.5 miles to the end. I picked up my pacer and set off, ready to get this done.

At around 90km we hit the last climb. It started off mellow and runnable, and quickly turned into a near-vertical scramble using stumps and roots to claw our way up to the top. I was still moving well, slower but still going forward, and waves of emotions overcame me. Not because I was almost done, but because for the first time that day I thought of my friends. I cried a bit, I laughed a bit. I allowed myself to sit with my emotions, to sit with my feelings, embrace those feelings, the feeling of why I was allowed to live, and why they had to depart this world. Shedding tears of joy from remembering their smiles, and their laughing.

As we descended into Maastricht and finished at the train station, a passage from the Gita came into my head. “Every endeavor is covered with fault, such as a fire is covered by smoke. The consciousness behind the endeavor is the real offering of love.” I ended up getting the supported FKT, and we raised over $2000 for Wounded Warriors. Personally, as disappointed as I was, I had a transformative experience, a change of heart. Overall, a successful day.

Thanks to everyone for contributing, the kind words, the text messages, and all the love. Though undeserving of the support, it touched my heart.

If this moved you, feel free to touch base with Ari directly at his email address, sonnenbergari@gmail.com. You can also follow him on Instagram.

Beyond that, if you have the means, I’d encourage you to donate to the Wounded Warrior Project in Ari’s name. The Freetrail community raised more than $2000 so far!